by BRYAN STANTON
in NATIONAL CONFERENCE

(The photo above is from the San Diego Fringe Festival. This post is part of a series on San Diego theatre and culture.)
As the newly installed Managing Director of Actors Alliance of San Diego (AASD) I have received a crash course in the needs of local actors over the past few weeks. The various things I’ve learned have given me a clear idea as to what AASD has done to help Actors in the past (Actor Web Profiles, All City Auditions, Training Programs, Actors Festivals) and what types of things our Actors, not only need, but WANT, out of AASD.
AASD is in a unique situation, in that we are one of only five organizations in the United States that focuses specifically on helping actors. San Diego has always had a very vibrant theatre community which provides ample opportunity for AASD to get out there and help Actors get jobs, and with the TCG’s National Conference coming to San Diego, we will be able to step up and give our actors not only attention on a local level but also on a national level.
I am honored to welcome the TCG to San Diego. This is going to be a great opportunity for us to show everyone why San Diego is “America’s Finest City”. The TCG conference will reaffirm the artistic values that are already so prevalent in San Diego and help us to expand our horizons so we are able to produce more new works and provide more actors with paying gigs.
I am actively working to ensure that our San Diego actors will be able to showcase their talents during the TCG Conference (which if I didn’t mention it already, will expose our actors to not only local theatre companies but every major theatre company in the NATION).
I have kicked off my new job by creating and implementing a new Artist Development Program (participation information will be on our website soon). The Artist Development Program will feature workshops on how to develop, fund and perform your own works. Basically, how to self-produce a show. The Program will culminate in an Actors Festival where a select number of participants will performing sections of their own work during the TCG Conference.
AASD will also be hosting a second large audition in 2014. In March 2014 AASD will host the 27th All City Audition. As many of you know this audition allows actors to perform their best monologue(s) and a song in front every major house and casting director in Greater San Diego. With so many national companies coming to visit San Diego AASD will be hosting our first National Audition in June of 2014.
The Artist Development Program and National Audition Call will also directly lead to helping our local actors get International attention through our work with the San Diego Fringe Festival. The Second San Diego Fringe Festival will kick off in July 2014, just following the TCG Conference. AASD is working with San Diego Fringe Festival to give our actors local, national and international exposure to directors, producers, presenters, and management/agents.
2014 is going to be a phenomenal year for San Diego Theatre and Actors Alliance of San Diego is proud to be able to step up and be the voice for our actors.

As the AASD Managing Director Bryan Stanton is responsible for increasing the organizations visibility in the community and effectively communicating information regarding AASD to members and the community at large. Bryan is also responsible for managing the membership program, including creating and implementing member benefits and incentives; tracking and managing member retention; seeking out new members; and evaluating the needs of members. Additionally Bryan is responsible for the business and administrative tasks and duties necessary to run a not-for-profit arts organization; creating and executing the organization’s programs; writing grants; spearheading fundraiser events and ongoing fundraising programs; creating and maintaining educational programs; and the overall public relations and marketing of the organization.
Outside of AASD: A San Diego based Arts Educator and Music Director Bryan works as a Show Production Supervisor at Sea World San Diego where he is the Music Director for Shamu’s Christmas and Madagascar Live! Operation: Vacation and Director of SoundWaves at SeaWorld. Bryan holds a voice studio at his home in Chula Vista and works as Music Director for several youth theatre and not-for-profit theatre groups. Bryan has been seen in performances with Lyric at the Birch, San Diego Opera, Sea World San Diego, Legoland California, Point Loma Actors Theatre and SDSU Opera Theatre. Bryan holds a Bachelor of Music degree in Voice Performance from San Diego State University. Bryan is a member of the American Guild of Musical Artists and an alumnus of Phi Mu Alpha Music Fraternity.
Posted by Anonymous at 10:08 PM No comments:


I had the pleasure to sit down with Phil Johnson on the set of his latest starring role in “Mistakes Were Made” at the Cygnet Theatre, to discuss the play with him and get to know his character a little better. His character, Felix Artifex or “Arti”, is a fast-talking B-list producer who gets in over his head when he takes on an epic about the French Revolution. Arti experiences a series of let downs involving egotistical movie stars, stubborn writers, his estranged wife, and a mess involving sheep, but despite the unforeseen challenges, he carries on with his goals as a producer. 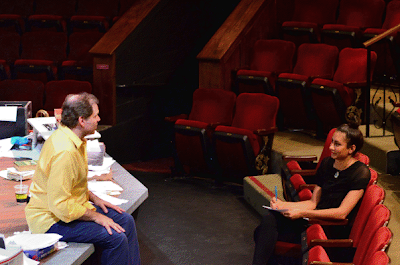 Phil mentioned how there were several times he had to make challenging decisions during his professional career as an actor, as well as during the process of perusing different avenues of acting, and that he values the experience he gained in doing so. His recommendation to young and upcoming actor’s is to continue to keep putting effort in the right direction by “getting up to bat” and taking a swing at perusing new opportunities and avenues of acting. Mistakes can come as a result of chasing different opportunities, and in the current economy, many people can relate to the saying itself, “Mistakes Were Made” regardless of their background. Phil noted that in life things don’t always go as planned or expected, but these can be some of the most meaningful and interesting journeys of one’s life. In the character Arti’s case, persistence turns into obsession and his dream overwhelms him, but Phil emphasizes the importance of not forgetting how to live despite chasing one’s dreams. Much like his character Arti experiences, those times up to bat can lead to a few strikes, but for all of the successes in Phil’s career he has hit a home run with his following in San Diego. 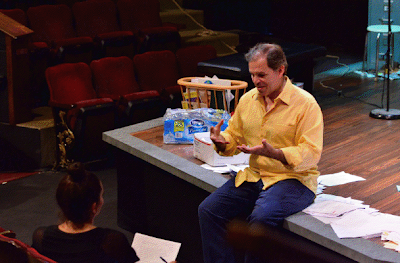 From humble beginnings as an enthusiastic high school theatre student in Chicago, to touring on Broadway in Les Miserables, he has since had years of professional experience in comedy. Phil has enjoyed his past 15 years in San Diego greatly, and has performed in numerous shows such as The Man Who Came to Dinner at Coronado Playhouse, Leading Ladies at North Coast Repertory Theatre, and in a an annual original sketch comedy show called 'Casa del Haha' at Tango del Rey and North Coast Rep to name a few.

He praises the Actor’s Alliance as well as the exposure and opportunities gained from the All City Auditions as helpful factors in his continued success during his time in San Diego, and are excited about the upcoming San Diego Fringe Festival in July 2013 for all of the future prospects this will give the acting community. 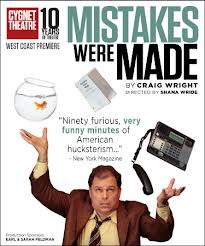 You can see Phil in the "Mistakes Were Made" at Sep 20th through Oct 21st 2012 at The Cygnet Theatre in Old Town. Go and support your fellow AASD member, Phil Johnson!!


BELOW IS A SNIPPET OF PHIL'S PROJECT:  "Casa del Haha"

I recently got to sit down with Nikki Castillo, the eighth grader playing the title role in La Jolla Playhouse's World Premiere production of "The Nightingale" (from the creative team of Broadways SPRING AWAKENING).  The twelve year old landed the job during the "Actor's Alliance" All City Auditions. I remember being impressed by her monologue and song during a rehearsal and I guess I wasn't the only one. (I understand she hit the jackpot after her performance, however she remains quiet about any other job opportunities she received). 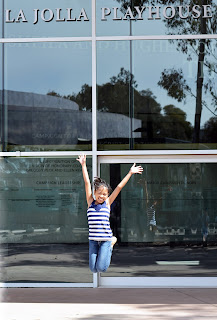 Nikki told me that "The Nightingale" tells the story of a dying Chinese Emperor who reflects upon his regrets of having been constricted behind the walls of the Forbidden City. He discusses his choice to be with the woman who was arranged for him to marry instead of the woman he loved.  The Nightingale, a bird, helps him escape his hemmed-in life through her voice/music.


I asked Nikki if there was anything challenging about the role.  She replied, "The director wants me not only to be graceful, but to show the more animal side of the bird."  She said that she is already standing on someone's shoulders and harnessed in to fly so to be both lovely and graceful as well as animalistic is challenge but also fun.  The director, Moises Kaufman, is helping her find the balance.    I was expecting her to say that she had a list of "dream roles", but she answered the question quickly and intelligently.  "This one. This is my dream role."

Nikki Castillo started acting when her parents "forced" her into a talent show in elementary school.  She didn't want to perform but ended up singing a solo and people told her she was good.  After that she realized she loved performing, more specifically musical theatre and more recently, pop.  BTW, she told me Lea Salonga is a performer she loves and looks up to and said that she hopes to continue performing for a long time.


You can see Nikki in the "The Nightingale" from July 10-August 5, 2012 at the Potiker Theatre at the La Jolla Playhouse on the campus of UCSD.  Go and support your fellow AASD member, Nikki Castillo!! 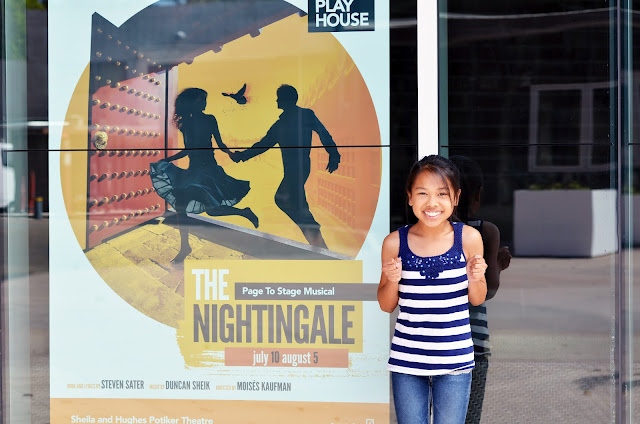 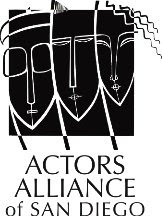